Buchholz relay is a gas actuated protection relay which is generally used in large oil immersed transformers of rating more than 500 kVA. It is used for the protection of a Transformer from the faults occurring inside the transformer. A typical Buchhloz Relay is shown below. 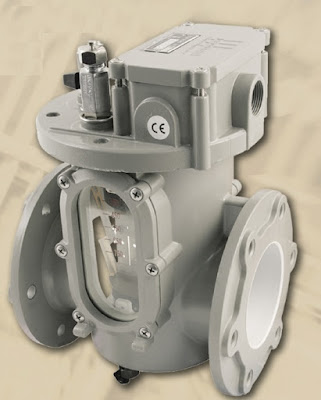 The gas actuated protective relay is designed to detect faults as well as to minimize the propagation of any damage, which might occur within oil-filled Transformers. The Buchholz relay is therefore particularly effective in case of:

Buchholz relay `can prevent the development of conditions leading to a fault in the transformer, such as the falling of the oil level due to leaks, or the penetration of air as a result of defects in the oil circulating system.

The adoption of other forms of protection does not therefore exclude the use of the gas-actuated Buchholz relay, as this device is the only means of detecting incipient faults, which if unnoticed, can cause heavy failures.

Buchholz Relay is installed in between the Main Tank of Transformer and the Conservator as shown if figure below. 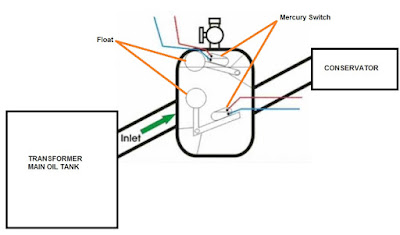 The operation of the Buchholz relay is based upon the fact that every kind of fault in an oil-filled transformer causes a decomposition of the insulating oil due to overheating in the fault zone or to the action of an intense electric field, and a generation of bubble of gas. These reach the relay which is normally filled with oil, through the pipe connecting the transformer to the conservator where the Buchholz relay is mounted.

Whenever a minor fault occurs inside the transformer, heat is produced by the fault currents. The produced heat causes decomposition of transformer oil and gas bubbles are produced. These gas bubbles flow in upward direction and get collected in the Buchholz relay. The collected gas displaces the oil in Buchholz relay and the displacement is equivalent to the volume of gas collected. The displacement of oil causes the upper float to close the upper mercury switch which is connected to an alarm circuit. Hence, when minor fault occurs, the connected alarm gets activated. The collected amount of gas indicates the severity of the fault occurred. During minor faults the production of gas is not enough to move the lower float. Hence, during minor faults, the lower float is unaffected.

During major faults, like phase to earth short circuit, the heat generated is high and a large amount of gas is produced. This large amount of gas will similarly flow upwards, but its motion is high enough to tilt the lower float in the Buccholz relay. In this case, the lower float will cause the lower mercury switch which will trip the transformer from the supply i.e. transformer is isolated from the supply.