Equal Area Criterion and Out of Step Condition

Let us consider a two source system as shown in figure below. The equation of power transfer between the two sources assuming lossless system is given as

Where Vs = Sending end Voltage 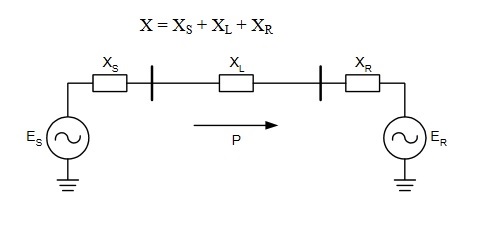 Thus from the above equation, it is clear that power transfer between the two sources is inversely proportional to the Reactance. If the net reactance increases, power transfer will decrease and vice versa.

During fault condition like Single Line to Ground Fault, Double Line to Ground Fault, Three Phase Fault etc. the effective transmission reactance between the two sources increases depending upon the type of fault. Due to this increase in the effective transmission line Reactance the power transfer between the two sources will reduce.  Due to this reduction of power transmission, the electric torque that counters the mechanical torque is also decreased. Thus

If the mechanical power is not reduced during the period of the fault, the generator rotor will accelerate with a net input torque (equal to Mechanical Torque – Electromagnetic Torque).

Assume that the two source power system shown in above figure is initially operating at a balance point of δ0 and hence transferring electric power P0. After a fault, the power output is reduced to PF, the generator rotor therefore starts to accelerate, and δ starts to increase. Let’s say the fault is cleared when the angle difference between the sources reaches δC. At this point, fault reactance will not be considered as the system is has attained normal configuration and hence the power transfer will follow the Pre Fault Power Angle Curve as shown in figure below. 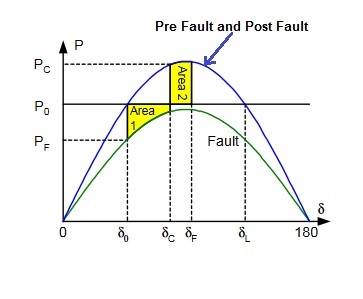 However, because of the inertia of the rotor system, the angle does not start to go back to δ0 immediately. Rather, the angle continues to increase till δF such that energy lost during deceleration in Area 2 is equal to the energy gained during acceleration in Area 1. This is called Equal Area Criterion.

Let us consider two cease now for the sake of better understanding of out-of-step condition and application of Equal Area Criterion.

Under this condition, the rotor of Generator will oscillate. But because of presence of damping, the amplitude of oscillation will continuously reduce and eventually δ will settle to balanced angle δ0.

Thus we can say that, in this situation the system is Transiently Stable. How much margin we have for transient stability?

If you carefully observe the above Power Angle Curve then you will definitely say that the margin is (δL– δF). Great!

But next question arises, who decides the value of δF?

You must say it is δC i.e. the point of fault clearing.  That is why δC is also known as Critical Clearing Angle. 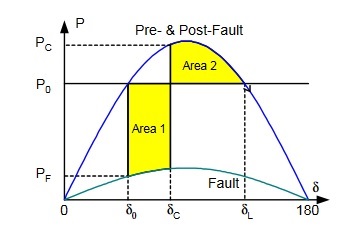 If Area 2 is smaller than Area 1 then at the time the angle reaches δL, then further increase in angle δ will result in an electric power output that is smaller than the mechanical power input. Therefore, the rotor will accelerate again and δ will increase beyond recovery. This is a transiently unstable scenario, as shown in figure above. When an unstable condition exists in the power system, one equivalent generator rotates at a speed that is different from the other equivalent generator of the system. We refer to such an event as a loss of synchronism or an out-of-step condition of the power system.

2 thoughts on “Equal Area Criterion and Out of Step Condition”