The above figure shows a Power Triangle. Side AB, BC and AC represents P, Q and S respectively. The above triangle is obtained from the below phasor diagram: 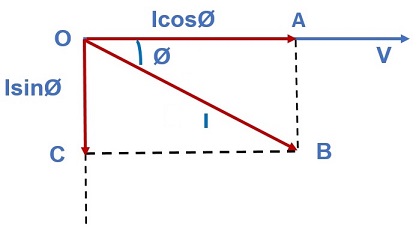 2) Power Factor is defined as the cosine of angle between the voltage and current phasor. It is denoted as pf and given as

The value of power factor is 1 for pure resistance and 0 for pure inductor / capacitor.

3) The angle Ø between AB and AC in power triangle represents the angle by which current is lagging with voltage.

5) The power factor can be obtained from the power triangle by taking the ratio of active power and apparent power, since cosØ = Base / Hypogenous = AB / AC