A VRLA battery or Valve Regulated Lead Acid Battery is commonly known as a sealed battery or maintenance free battery. This is one type of Lead acid rechargeable battery. Due to the construction of VRLA Battery, it do not require ventilation and can be mounted in any orientation and do not require constant maintenance. The reduced ventilation requirement is an advantage since these batteries can be used in confined or poorly ventilated spaces.

VRLA Battrey is widely used in large portable electrical devices, off-grid power systems and similar roles, where large amounts of storage are needed at a lower cost than other low maintenance technologies like Li-ion. Figure below shows a VRLA Battrey. 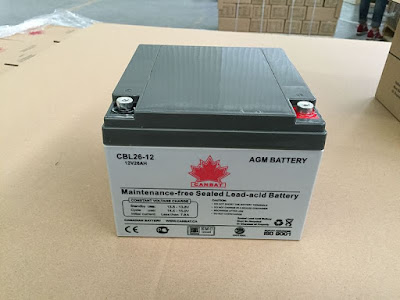 During charging of Vented Lead acid batteries, Hydrogen gas is generated. This Hydrogen gas often escapes the electrolyte before it can recombined to form water. To prevent the flammable gas from building up to dangerous levels, venting is required, both in the battery and in the battery room. These vents generally mean that the electrolyte can spill out of these batteries if they are tipped over, which presents a hazard during shipping and makes them unsuitable for many portable applications. Furthermore, the constant loss of Hydrogen leads to a reduction of water in the electrolyte, which must be replenished by opening the battery vent plug and topping up DM water.

VRLA battery attempt to avoid all of these problems by immobilizing the electrolyte. In doing so, the Hydrogen is trapped near the plates and is available for recombining when the battery is recharged. This dramatically reduces the water loss during repeated charge/discharge cycles and generally makes them “maintenance free”. It also reduces the amount of Hydrogen build-up to the point that no venting is required and the batteries can be completely sealed, which in turn allows them to be used in any orientation without fear of electrolyte spilling.

During rapid recharging, the electrolyte may boil and pressurize the case, or gas build-up may be too rapid for recombination. These effects necessitate the “valve regulation”. This is normally in the form of a one way pop-off valve that only opens in the case of pressure build-up. Even if the valve pops, the immobilizing agent prevents rapid, or any, acid leakage. VRLA battery have a pressure relief valve which will activate when the battery starts building pressure of Hydrogen gas, generally a result of being recharged at excessive voltage, typically greater than 2.30 volts per cell. Valve activation allows some of the gas or electrolyte to escape, thus decreasing the overall capacity of the battery. Therefore it is suggest that charging current of VRLA battery shall not exceed the specified value recommended by the manufacturer.