What is Eddy Current? – Concept of Electromagnetic Damping

What is Eddy Current?

The literal meaning of Eddy is a circular current. Thus the word itself means current having no definite circular loop. Eddy current is defined as the induced current on the surface of conductor in little loops or eddies due to changing magnetic flux. To better understand the concept of eddy current, let us take an example.

Suppose a metallic plate is rotated in the magnetic field as shown in figure below. Lets us draw an imaginary loop on the surface of plate. 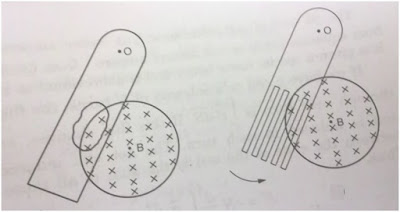 As the plate is rotated into the magnetic field, the flux linkage through the imaginary loop changes, due to which an induced current start to flow in the loop. We can draw a number of such imaginary loops on the plate and therefore current is induced on the surface of the plate in a variety of paths. This current is called Eddy Current. The direction of this current is found using Lenz’s Law. The basic idea is that we do not have a definite conducting loop to guide the induced current. The system itself looks for the loop on the surface along which Eddy Currents are induced.