How a Capacitor does Stores Charge?

A capacitor is a device for storing charge. It is usually made up of two plates separated by a thin insulating material known as the dielectric. One plate of the capacitor is positively charged, while the other has negative charge.

If C is the capacitance, Q = CV

The capacitance is a measure of the amount of charge a capacitor can store; this is determined by the its geometry and by the kind of dielectric between the plates. For a parallel plate capacitor made up of two plates of area A and separated by a distance d, with no dielectric material, the capacitance is given by :

C = ε0A/d where A is cross sectional area of Plate of Capacitor and d is separation between the plates.

Mind that capacitance has units of farads (F). A 1 F capacitor is exceptionally large; typical capacitors have capacitances in the rage of pF to microfarad range. 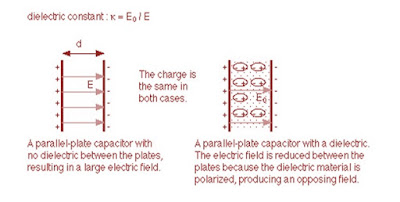 0 thoughts on “How a Capacitor does Stores Charge?”