HVDC Back to Back System

As we know that High voltage AC is used to transmit the electrical power for reducing the power transmission losses and because of the flexibility of AC System. In a transmission system different Grids are interconnected but some time it may happen that one or more Grid or Power System may not be in synchronization with other grid or Systems. To overcome these things a HVDC Back To Back System is used. A scheme diagram for the use of HVDC Back to Back System or HVDC Link is shown in figure below. 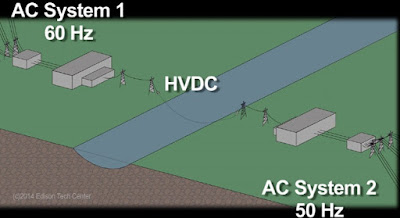 In an HVDC Back to Back / HVDC Link configuration two independent neighboring systems with different and incompatible electrical parameters like Frequency / Voltage / Short-Circuit Power Level etc. are connected via a DC link. The basic principle of operation of an HVDC linking system is based on the conversion of AC to DC and vice-versa by means of Rectifier and Inverter as shown in figure below.

Process involved in this System is simple theoretically. But in practice it is very much complex as it involves high voltages power semiconductor devices. Power from two or more neighboring system is first converted in DC with the help of power rectifier system and summed up. After summing, the resulted power is again converted in AC with the help of power inverter and supplied to different Grids. Thus a HVDC interconnection phase is involved in linking of different power systems to obtain a stable power system with uniform parameters.

HVDC link is much more beneficent than the frequency converter as frequency matching of two or more asynchronous systems is very much difficult than conversion and inversion ,this situation can be better understood by knowing that allowable variation in frequency in power system is +/- 1 HZ otherwise it may result in system collapse.

Why it is called Back to back System?

Advantage of HVDC Back to Back System: