It is an electrically programmable two-terminal device with small area and low parasitic resistance and capacitance. Figure below shows the symbolic representation of Untriggered and Controlled Antifuse. 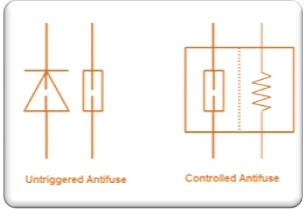 It is a Programmable Chip Technology that creates permanent, conductive paths between transistors.  In contrast to “Blowing Fuses” in the fusible link method, which opens a circuit by breaking the conductive path, the Antifuse method closes the circuit by “growing” a conductive layer via  two metal layers in between a layer of non-conductive, amorphous silicon is sandwiched as shown in figure below. When voltage is applied to this middle layer, the amorphous silicon is turned into poly-silicon, which is conductive.

A controlled Antifuse can be programmed by using some Chip so that when the Chip issues control command then a high voltage exceeding the limit value of Antifuse is applied and hence it becomes conductive and gives Logical / Boolean 1.

Antifuse – Non conductive when voltage is less than the limit value.

Antifuse – Conductive when voltage across the metal layers is more than the limit value.

For better understanding of Antifuse, I am explaining one use of it.  It is used in Christmas Light / Serial Light.

When one bulb in the series fails, there is a risk of the other lamps not getting the supply as the circuit is open circuited. This is avoided by having an Antifuse below the filament which fuses i.e. becomes conductive when the bulb filament fails.  This happens because the system voltage is applied across the single bulb in this case and hence it becomes conductive.

Once the Antifuse operates and closes the open circuit, the current flows as usual to the remaining bulbs and therefore there is no interruption to the glow of bulbs in Serial Lamps / Christmas Light. It is mostly used to permanently programmed ICs.

May 14, 2016 admin Power System No Comment
«HVDC Back to Back System
Why Size of Transformer Decreases as Frequency Increases?»