Over Reach of Distance Relay

What is Meant by Over Reach?

To understand the meaning of over reach, let us take an example of double circuit line in which one line is out of service and earthed at both end by Earth Switch. In the figure below, the distance relay is supposed to protect the line 1 due to its impedance setting. Now suppose a fault take place in line 3 at a distance x as shown. In this case distance relay 21 is not expected to trip but if proper care is not taken then 21 may operate. This is called Over Reach. Mind the word over reach, the word itself means that the relay has actuated beyond its reach setting. 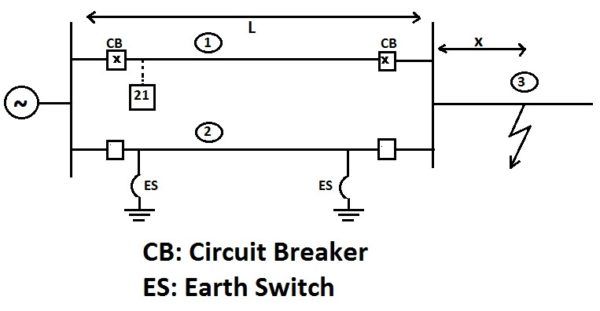 “Thus a distance relay is said to over reach if the impedance measured by the relay is less than the apparent fault impedance.” Over reach is often expressed in percentage as below.

Here, percentage over reach is (x/L)x100 %. Mind that we used length of line and distance of point of fault as impedance of line is proportional to length.

Cause of Over Reach

In such case, the effective reach of relay is given as

Hence percentage over reach for 400 kV double circuit line when one line out and earthed = 16.4 %

Thus whenever one line of double circuit line is taken out and earthed for maintenance or other activity, distance relay setting is reduced by this over reach percentage i.e. 16.4% by some authorities. In other words, distance relay setting is reduced to 85.6 %. After normalization of line, the setting is again changed to 100 %. This practice is usually not adopted in India due to rare chance of fault in the first section of other line 3.

One thought on “Over Reach of Distance Relay”