It is impossible to make a perfect / ideal circuit component which can have only one property. For example a Resistor do not have only resistance rather it have associated inductance and Capacitance too. Same is the case with Capacitor and Inductor. Therefore a circuit component have some impurity which causes unwanted quantities in the circuit known as Residues. However, a particular quantity such as resistance in a Resistor, capacitance in a capacitor and inductance in an Inductor are made to dominate to negligible effect of residue.

Resistor: A resistor is a device which offer resistance. The design of resistor is such that it satisfies the following properties:

As no single material can have all these properties therefore selection of material is done based on the application of Resistor. Material used for Resistor are describe in below section.

Spools / Frames for Resistance Coil: Metallic spools are used for high quality d.c resistors instead of wooden spools because  of following advantages:

Resistance Wire:The Resistance wire is generally double silk or silk and cotton covered.The wire is enameled before these coatings are applied. High quality resistors are wound with only one layer of wire. The advantage of this are:

Now suppose the value of standard resistance is 0.1 ohm the percentage error will be (0.001 / 0.1)*100 = 10%. Therefore error is increasing because of Contact resistance of connecting leads as we are measuring the low resistance.

In Four Terminal Resistor, Voltage = Between the potential terminals P and P’ which are located in the middle portion of the Resistor.

The value of Resistance between the potential terminals P and P’ is called nominal Resistance. As P and P’ are located in the middle portion of the Resistor hence effect of Contact resistance of the connecting lead is ruled out. Also the current distribution in the middle part of Resistor is uniform therefore it gives a correct value of resistance.

This principle is used in the measurement of contact resistance in the joints between Circuit Breaker and conducting Bus bar, Current Transformer and connection bus etc. If you want to get detail of Measurement of Contact Resistance Measurement by four terminal method, follow me.

Effect of Frequency on Resistor: A Resistor may be represented by an equivalent circuit as shown below. 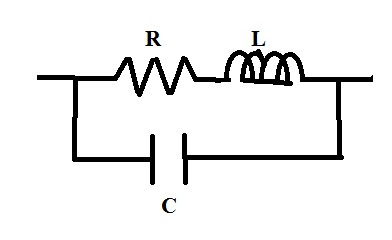 This equivalent circuit is valid for low and Medium frequencies. This circuit shows and Inductance L in series with D.C Resistance R and the combination shunted by Capacitance C. Let Z be the equivalent impedance at angular frequency ω rad/sec.

Writing the Real and Imaginary parts, we get

As Xeff is very small, therefore ω2LC may be dropped.

The characteristics of Resistor is also expressed in terms of Time Constant Ƭ,

Therefore, it is clear that time constant of resistor may either be positive or negative depending upon whether L/R is greater than CR or not. If L/R is greater than CR then Ƭ is positive. This is the case for small resistor (1 to 10 ohm) in which Inductance dominates over Capacitance. For higher value of resistance (above 1000 ohm) capacitance predominates over Inductance and hence Ƭ is negative for Higher Value Resistor. The time constant of a Resistor is an indicator of its performance at higher frequencies and its value ranges from 0.5 to 1 micro seconds.

For D.C Resistance to be equal to effective Resistance Reff, R = Reff

If Resistance to show no inductive effect then Xeff = 0

For Resistor, Inductance should be as low as possible, therefore L = CR2 and hence in that case D.C value of resistance will be equal to A.C value. Effective Resistance for zero Inductance will then be

Also,as R2 = L/C, hence for small Resistor, it should be designed so that Inductance is very low and Capacitance is high.