As we know that the total energy consumed by a load is given as,

But as the load current may not be constant rather it will vary as per the loading therefore we need to use integration for calculating the total energy consumed by load.

Thus we need an integrating instrument which can measure and record the energy consumed by the load under varying load condition. The simplest such instrument is Single Phase Induction Type Energy Meter. 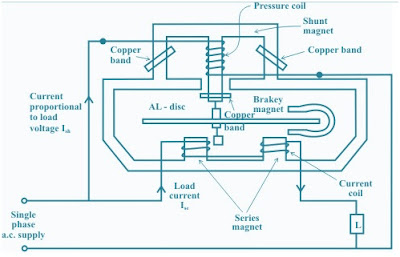 The driving system of the meter consists of two electro-magnets. The core of these electromagnets is made up of silicon steel laminations. The load current excites the coil of one of the electromagnets. This coil is called the current coil.

The coil of second electromagnet is connected across the supply and, therefore, carries a current proportional to the supply voltage. This coil is called the pressure coil. The two electromagnets are known as series and shunt magnets respectively as shown in figure. 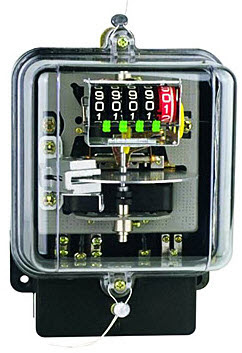 The function of a registering or counting mechanism is to record continuously a number, which is proportional to the revolutions made by the moving system. By a suitable system, a train of reduction gears the pinion on the rotor shaft drives a series of five or six pointers. These rotate on round dials, which are marked with ten equal divisions.

When the energy meter is connected in the circuit, the current coil carries the load current and the pressure coil carries the current proportional to the supply voltage. The magnetic field produced by the SERIES magnet i.e. series coil is in phase with the line current & the magnetic field produced by the shunt magnet i.e. pressure coil is in quadrature with the applied voltage since the coil is highly inductive. Thus, a phase difference exists between the fluxes produced by the two coils. This produces a driving torque and, thus, disc starts rotating. The number of revolutions made by the disc depends upon the energy passing through the meter. The spindle is geared to the recording mechanism so that electrical energy consumed in the circuit is directly registered in KWh. The speed of the disc is adjusted by adjusting the position of the breaking magnet. For example, if the energy meter registers less energy than the energy actually consumed in the circuit, then the speed of disc has to be increased which is obtained by shifting the magnet nearer to the centre of the Disc and vice-versa.

R= No. of revolution made by disc in t sec.