The main difference between the Smart Grid and Conventional Power Grid on the basis of the design idea is that Smart Grid is based on Demand Follows Supply while conventional grid on Supply Follows Demand. That means, the amount of coal dumped into a thermal power plant in some way depends on the estimated electricity demand at a distant place in addition to transmission losses.

What has changed today?

These days, more renewable electricity from Wind and Solar is being pumped into the Conventional Power Grid. This is happening at the supply side, large scale wind and solar farms, as well as the demand side, consumer rooftop solar. Since we are not having control of wind speed and sunshine, the only possibility is to forecast electricity generation from these sources and manipulate other generation and demand accordingly.

With increasing renewable electricity, when it takes over as the conventional generation, in the Power Grid, the new paradigm will say: Demand Follows Supply, else give us bigger batteries! Although it is good to have bigger storage, it is cheaper and rewarding for demand to follow supply.

How will we do that?

This is done by Integrating communication technology to the Power Grid and inform the consumers about real-time electricity prices (which will not be fixed as it is today, due to varying renewable generation) through their meters, which would be called smart-meters. 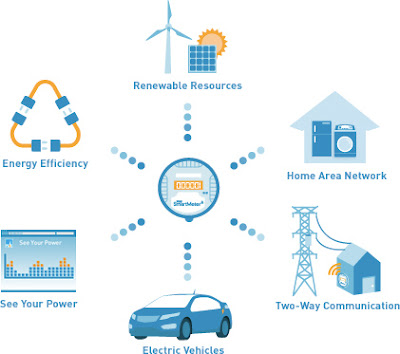 Imagine this scenario when wind generation is excessively high and the electricity price drops to zero. Wouldn’t a residential consumer want to use his washing machine at this time? Hell YES! Would a cold storage industrial consumer miss this window of opportunity? Hell NO! That hints at what is known as Demand-Response, and is enabled on the Conventional Power Grid in a Smarter way.

Any other advantage of this Smartness of Grid?

Apart from renewable electricity integration and Demand Response, automated fault detection and correction, advanced safety measures, power quality improvement etc. are being implemented in the Power Grids so as to improve reliability of electricity service. All such upgradations render the Conventional Power Grid a new Smart look, and they like calling it The Smart Grid.

May 15, 2016 admin Power System No Comment
«Smart Grid – An Overview
Why & When Consumer are Paid from Utility for Consuming Electric Power?»