Losses in the transformer are of the order of 1% of its full load kW rating. There are mainly two types of losses in a Transformer i.e. Core Loss and Ohmic Loss. Because of these losses the winding of transformer as well as Core gets heat up and we need to provide sufficient cooling to remove heat and maintain a constant winding and Core temperature.

Various types of cooling methodologies are used for Transformer but before going to each methodology, we will have a look at the General Method of designating a particular cooling method i.e. class.

In the nameplate of Transformer, four letter represents the cooling class / method of the Transformer. 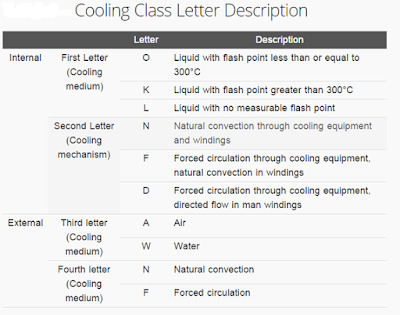 This type of Transformer cooling method used Transformer capacity up to about 5 MVA. ONAN is the simplest method of cooling of Transformer core and winding. In this method, the heat from the winding and core is transferred to the surrounding Transformer Oil by conduction. The heated oil then moves up in the Transformer tank and cold Oil occupies the vacant area. In this way oil circulates by convection. As the heat removal capacity depends on the surface area, we need to increase the surface area so that the heated oil at the upper portion of tank cools faster and become cold. Because of this purpose Radiator is used as shown in figure below. Mind that atmospheric air is here responsible for removal of heat from the hot oil in the Radiator. As the circulation of air is natural, hence it is Natural Air convection cooling. 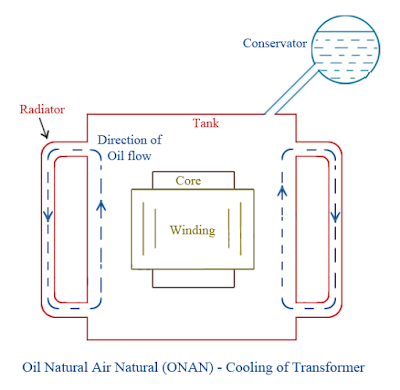 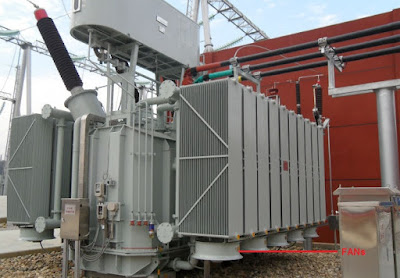 OFWF stand for Oil Forced Water Forced. As the name implies, in this method of cooling Oil is cooled using Water and oil is forced toward water. Here Water acts as the ultimate heat sink. A shell and tube type heat exchanger is used in which oil flows from the tube side and water from the shell side as shown in figure below. To have maximum cooling of Oil, oil is pumped from the Oil tank to the Heat Exchange and the direction of flow of oil in tube side is opposite to the direction of flow of water in the shell side. 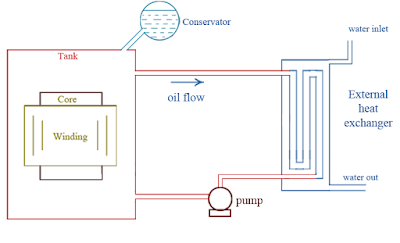 This type of cooling is provided for very large transformers which have ratings of some hundreds of MVA like Generating Transformer will have very high rating and rating equal to the rating of the generator.

OFAF stand for Oil Forced Air Forced. Transformers above 60 MVA employ a combination of Forced Oil and Forced Air Cooling. In Forced Oil Air Forced cooling system a separate cooler is mounted away from the transformer tank. This cooler is connected to the Transformer with pipes at the bottom and the top. The oil is circulated from the transformer to the cooler through the pump. The cooler is provided with the fans which cool the oil by forcing air on the cooler as shown in figure below. 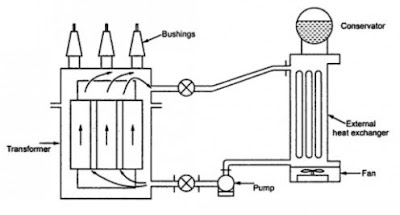