Why Insulation Resistance is Inversely Proportional to Length?

Now, if we cut the cable into two equal halves, then the leakage current through the insulation of cable will reduce by half as there is no full length of cable available for leakage current. Therefore, we can say that IR has increased two times i.e. to 1000 Mohm for our example.

Now, we will see this aspect of insulation resistance mathematically. Consider a single core cable of radius R1 and internal sheath radius R2. Let L be the length of cable and ρ be the resistivity of the insulation. 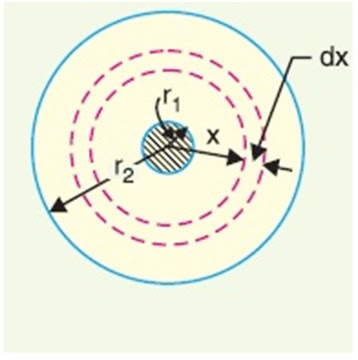 For calculating the insulation resistance, we take an infinitesimally small layer of insulation of thickness dx at a radius R from the centre of the cable conductor. The length of insulation from where leakage current will flow is dx and area of cross-section will be 2πxL (A cylinder of length L and radius x).

Now, for getting the IR of whole cable we need to integrate up to a radius of R2 starting from R1 and to a length L.

Thus it is clear from the above expression that Insulation resistance is Inversely Proportional to the length of Cable.