For moving iron instrument scale to be linear, current flowing through the stationary coil must be directly proportional to angular deflection i.e. I = CƟ where C is some constant. How am I saying this? It’s quite simple, if the scale is linear that means angular position of needle shall correspond to current (if we are measuring current).

As we know that the deflection of van of moving iron instrument is given as,

Thus from the above, the necessary condition for moving iron instrument scale to be linear is that product Ɵx (dL/dƟ) must be constant. Thus we got a design constraint for having linear scale.

Now the question arises, can we have this product constant? This is not feasible at all. See when Ɵ is zero, (dL/dƟ) must be infinite which is not possible. In practice; moving iron instrument scale is made linear from maximum deflection down to 1/10th of the maximum deflection. In this range of linear scale, relationship between angular deflection and (dL/dƟ) is hyperbola as shown in figure below. 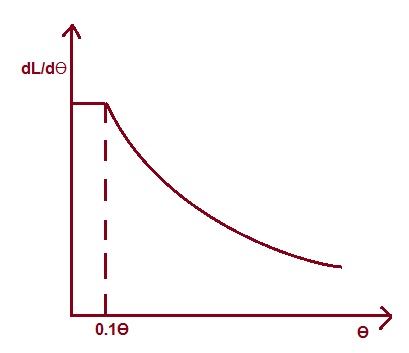 It is also possible to design and construct and instrument in which a small portion of the range, which is of importance is expanded over a large part while the remaining part is compressed into a relatively small space. It is quite clear form (1) that portion of  moving iron instrument scale near zero can never be made uniform as it would demand to have infinite dL/dƟ.

4 thoughts on “Why Moving Iron Instrument Scale is Non-uniform?”