Moving Iron Instruments are the most common type of ammeter and voltmeter used at power frequencies in laboratories. These instruments are very accurate, cheap and rugged as compared to other AC instruments.

In Moving Iron Instruments, a plate or van of soft iron or of high permeability steel forms the moving element of the system. The iron van is so situated that it can move in the magnetic field produced by a stationary coil. Figure below shows a simple moving iron instrument. 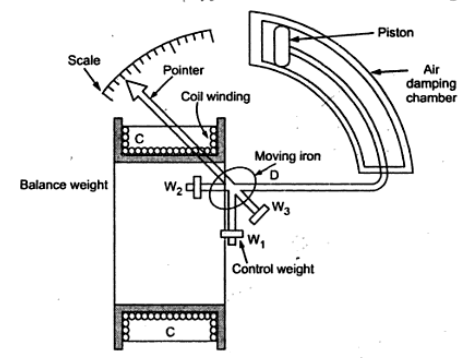 The stationary coil is excited by the current or voltage under measurement. When the coil is excited, it becomes an electromagnet and the iron van moves in direction of offering low reluctance path. Thus the force of attraction is always produced in a direction to increase the inductance of coil. Mind that as the van follows the low reluctance path, the net flux in air gap will increase which means increased flux linkage of coil and hence inductance of coil will increase. It shall also be noticed that, the inductance of coil is variable and depends on the position of iron van.

Suppose that, at any instant of time current flowing in the coil is I. Thus the energy stored in the coil in the form of magnetic field = (1/2)LI2.

As soon as the current changes to (I+dI), deflection in the pointer becomes dƟ resulting into change in inductance of coil from L to (L+dL). Let this deflection in pointer is due to deflection torque Td.

Change in stored energy of coil

But electrical energy supplied by the source = eIdt

According to law of conservation of energy, this electrical energy supplied by the source is converted into stored energy in the coil and mechanical work done for deflection of needle of Moving Iron Instruments.

Thus deflecting torque in Moving iron Instruments is given as

From the above torque equation, we observe that the deflecting torque is dependent on the rate of change of inductance with the angular position of iron van and square of rms current flowing through the coil.

Ɵ = Deflection in the needle

In equilibrium state, deflecting and controlling torque shall be equal as below.