Average value of AC or alternating current is expressed by that DC current which transfers across any point of circuit the same charge as is transferred by the AC current for the same time.

This means, if AC current I in a circuit flows for t sec and charge Q is transferred across any point of circuit in this time t by this AC current then the same charge Q will also be transferred by its avg. current Iavg in the same time.

Calculation of Average Value of AC

Let us consider a sinusoidal current i = ImSinωt as shown in the figure below. We will calculate its avg. value for one time period ωt = 2π from the definition of average value of alternating current. 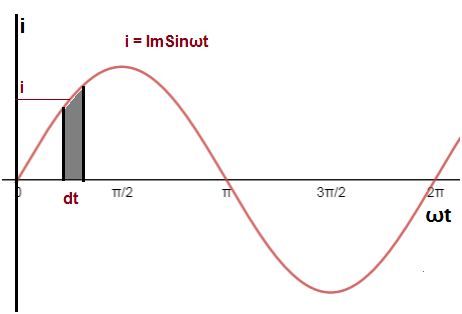 Now, we will integrate this for the entire time period i.e. from ωt = 0 to 2π to get the total charge transferred in one time period. 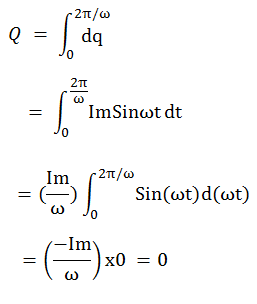 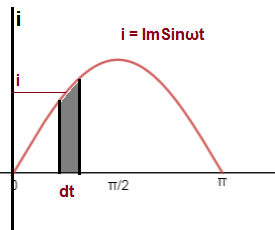 Charge Transferred across any point of circuit for half cycle is given as below. 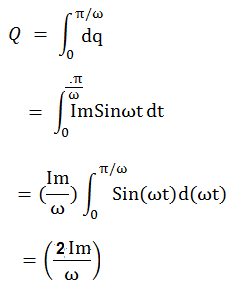 If Iavg being the average value, then this current must also transfer the same charge for t = (π/ω).Since average value is the DC value, this charge will be equal to Q = Iavgx(π/ω).

The average value of AC sinusoidal current or voltage is equal to 0.637 times of its peak value.

Formula of Average Value of AC Current or Voltage

From the above discussion, it must have been clear to the reader that, avg. value can easily be calculated by just using the basic concept. But we can have generalized formula to find out average value.  Average value of any periodic function with time period T is given as

Let’s apply the formula. But for this, first of all we need to know the function and its time period. Here, the function is output current waveform which is defined as below. 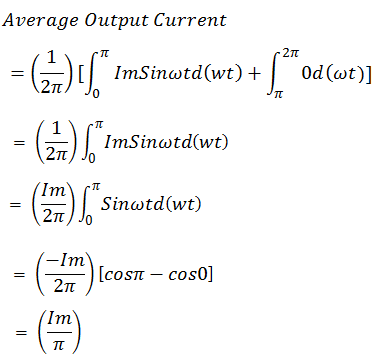 Thus, the average value of output current of single phase half wave rectifier is equal to its peak value divided by π i.e. (Im/π). Similarly, the average value for full wave rectifier can also be calculated. In fact, the formula is general and can be used for any given function. This is a very important concept and one must understand how to apply the formula for getting its value. This is used very frequently in Power Electronics in rectifier circuit. Watch the video for a quick recap of the article and better understanding.

Hope, you fully understood the average value of AC quantities, its formula and above all how to apply it. Let me ask you one question. Is average value a DC quantity? Please write your answer in comment box.