Concept of Electricity – What is Current?

Electric Current is defined as the rate of flow of net charge through the conductor with respect to time. The direction of current is conventionally is in the direction of flow of positive charge. It is the flow of charge per unit time.

Thus 1 Ampere of current is defined as the flow of 1 columb of charge in 1 second. Ampere is SI unit of current.

If we look at the structure of an atom, atom consists of Nucleus and Circular Orbits (also called cell). Proton and neutron lie in the Nucleus of atom while electrons revolve around the Nucleus in the circular orbits. Mind here that, centripetal force required for the circular motion is provided by the columb force of attraction between the nucleus and electron.  There is infinite number of orbits around the nucleus. 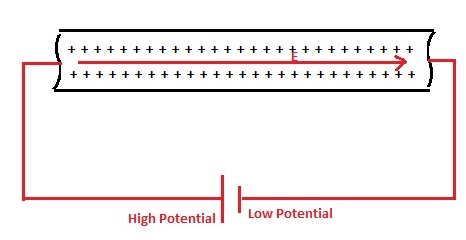 Due to this electric field, the loosely bound electrons in the outermost cell get detached from the influence of Nucleus and become free to move. Thus the atom becomes positively charged due to detachment of electron. Note that theses positive ions are so heavy that they cannot move under the influence of electric field. It is the free electrons which drift by experiencing a force opposite to the direction of electric field as per the Columb’s Law. Due to this force, the free or mobile electrons drifts toward the positive terminal of the battery. Mind the word drift. As under room temperature, the free electrons of the conductor are in random motion, therefore on experiencing an electric field, the electrons starts to drift toward the high potential terminal from the low potential terminal while having some random behavior. The drift of electrons from high potential to low potential actually follows a zig zag path. During the drift of electron, it suffers many collisions with the positively charged ions.

Thus due to the drift of electron, there is a net flow of electrons per unit time. Therefore from the definition of current, a net current flows through the conductor.