Concept of Series and Shunt Faults

Electrical Faults can be classified into two categories: Shunt Faults and Series Faults. Shunt faults include power conductor or conductors to ground or short circuit between the conductors.

Series type of fault is basically unbalance in system. Suppose we have used Fuse / Breaker to protect the circuit. If one or two phases open while the third phase remain in circuit, such kind of fault is called Series Fault. Notice that Series Fault may also occur in case of one or two Broken Conductor. Here broken conductor is like breaking of jumper on the tower of transmission line which is not touching the grounded tower body.

Shunt faults are classified as:

Of the above faults, first three faults are unsymmetrical fault as the symmetry is disturbed in one / two of the phases. The method of Symmetrical Components shall be applied for the analysis of such unbalance and fault. 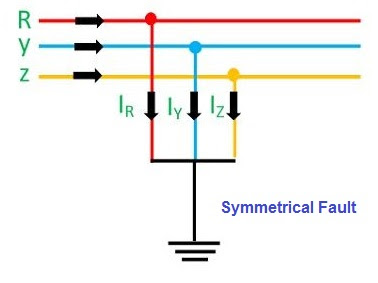 Three phase fault is balanced fault which can also be analyzed using concept of symmetrical components.

Series faults are classified as:

These faults also disturb the symmetry and therefore these faults are unbalanced faults and hence shall be analyzed using concept of symmetrical components.

The potential of neutral when it is grounded through some impedance or is isolated will not be at ground potential under unbalance condition as in unsymmetrical fault rather it will have some finite value with respect to ground.

For a three phase system we know that,

You may also like to read Calculation of Symmetrical Components

One thought on “Concept of Series and Shunt Faults”