The concept of Subtransient, Transient and Steady State arises in case of fault in an Alternator. Let us assume a sudden short circuit in three phase of alternator. The fault current will flow in all the three phases of alternator and its waveform will be as shown in figure below. 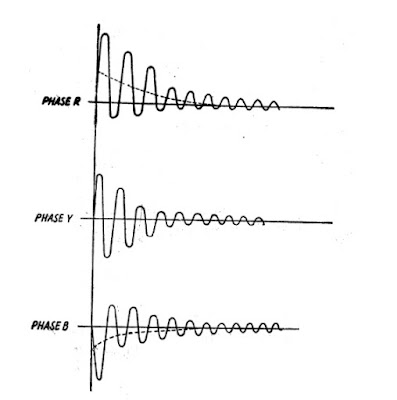 When the alternator is short-circuited, the currents in all the three-phases rise rapidly to a high value of about 10 to 18 times of full load current, during the first quarter cycle. The flux crossing the air gap is large during a first couple of cycles. The reactance during these first two or three cycle is least and the short circuit current is high. This reactance is called subtransient reactance and is denoted by X”. The first few cycles come under sub-transient state.

Finally the transient dies out and the current reaches a steady sinusoidal state called the Steady State. The reactance in this state is called steady state reactance Xd. Since the short circuit current of the alternator lags behind the voltage by 90 degree, the reactance involved are direct axis reactance.

As clear from the figure above, the d.c. components in the three phases are different; hence the waveforms of the three phases are not identical. If voltage of phase, say, Y, is maximum at the instant of short circuit, the DC component of short circuit current is zero. Hence the waveform is symmetrical as shown in figure below. 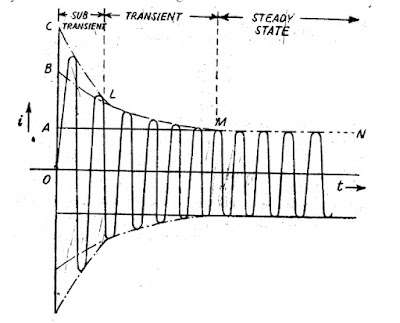 The currents and reactance are given by the following expressions, 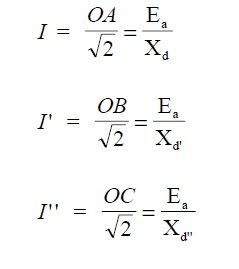 As the short circuit occurs, the short-circuit current attains high value. The circuit breaker contact starts separating after the operation of the protective relay. The contacts of the circuit breaker separate during ‘transient state.’ The r.m.s. value of the current at the instant of the contact separation is called the breaking current of the circuit-breaker and is expressed in kA.

If a circuit-breaker closes on existing fault, the current would increase to a high value during the first, half cycle. The highest peak value of the current is reached during the peak of the first current loop. This peak value is called making current of the circuit breaker and is expressed in kA. This is the reason making current of Circuit Breaker is higher than the Breaking Current.

You may like to read, Why Making Current of Circuit Breaker is more than Breaking Current?