Working Principle of Transformer is based on  Faraday’s Law. Let us assume a Core Type Transformer as shown in figure below. 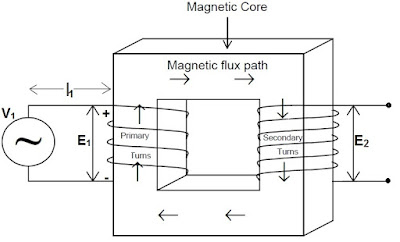 As shown in the figure, Primary winding of the Transformer is supplied with an alternating voltage source V1 while keeping the Secondary open. Due applied voltage V1, an alternating current Ie starts flowing through N1primary turns.

This phenomenon is popularly known as Transformer action.

Where Øm is the maximum value of magnetic flux in Weber (Wb) and ω = 2πf is the angular frequency in rad/sec.

Thus we see that the emf e1induced in the Primary winding is sinusoidal and lagging behind the flux Ø by 90°.

It must be noted and understand that the direction of emf induced the Primary winding will be in such a direction to oppose the cause i.e. applied voltage here in this case. As we have assumed the Transformer winding resistance negligible, so we can write for Primary circuit,

Similarly, as the flux in the Transformer core is Ø, this flux will also link with the Secondary to induce an emf in the Secondary winding.

RMS value of emf E2induced in the Secondary winding

Thus we can write,

Consider the figure below.

In this way we see that Secondary current tends to oppose the working flux. Any reduction in working flux Ø will cause a reduction in Primary emf E1 but as we have sen from from equation (2),

This simply implies that working flux in the core of Transformer must be constant. To have a constant flux, Primary must draw an additional current I1’ from the source to compensate for the reduction caused by Secondary current.

Here I1’ is called load component of current.

Ie is called the Magnetizing current as this much of current is required to set up working flux in the core when the Secondary terminal is open.

Again as we have considered Transformer winding have negligible resistance so for Secondary circuit,

Note that, concept of Transformer action is very important and one should know hoe to use and implement this concept.