Local Breaker Back-up Protection or LBB protection is provided to ensure the healthiness Power System by isolating the faulty section in case of failure of tripping of Breaker intended for tripping on sensing fault. This protection is also called Breaker Failure Protection. 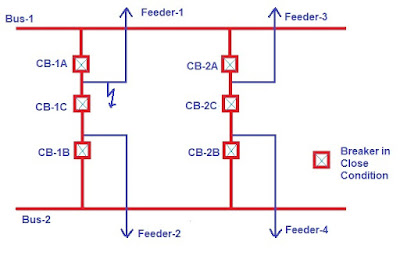 Figure above shows the single line diagram of one and half breaker scheme. Let us assume that all the Feeders are in service and all the Breakers are in close condition. Suppose a fault in the Feeder-1 occurred. So as per the Power System Protection philosophy, to isolate the faulty section, Breaker CB-1A and CB-1C must trip after receiving the tripping command from Master Trip Relay.

Now coming back to our discussion, let us assume that after getting the trip command from Master Trip Relay, Breaker CB-1C could not open but CB-1A opened. What will happen then?

As CB-1C failed to open, the fault will continue to be fed by Bus-2 vial CB-1B which is not a healthy condition for Power System. Thus in this case we need to isolate the fault which is achieved by Local Breaker Back-up Protection / Breaker Failure Protection.

Logic of Operation of LBB Protection:

As clear from the foregoing discussion, LBB Protection shall operate in the event of failure of a particular Breaker to trip. But the question arises “How will LBB Relay sense Breaker Failure?”

Suppose a fault as shown in the figure above occurred. If Breaker CB-1A opens and CB-1C fails to open the LBB Protection Relay of CB-1C will see an overcurrent even after the operation of Master Trip Relay. Thus the LBB Relay confirms the failure of Breaker to trip.

There are two thing which are important to understand for LBB Protection. One is LBB initiation and another one is LBB actuation.

To avoid such a situation, LBB initiation and actuation logic is provided.

LBB Relay will initiate when

Master Trip Relay actuated AND over current is persisting

So the timer of LBB Relay will start on.

As an intentional time delay (say 200ms) is provided, hence after the initiation of LBB logic, say the condition for LBB Initiation is persisting for 200 ms then LBB Relay shall actuate to trip CB-1A and CB-1B.

Next, assume the same case of fault in Feeder-1 but this time CB-1A failed to open. In this case LBB Protection shall trip CB-1C and CB-2A.Check out Power System by C.L Wadhwa. Must solve objective given at the end of the book.

Hope it help you. If you have any doubt, feel free to ask. Thank you!
September 15, 2016 admin Power System Protection 25 Comments LBB Protection
«Concept of Transformer Action
Parallel Operation of Single Phase Transformers»