We are quite familiar with Synchronous Generator or often called Alternator. There are mainly two types of Synchronous Generator from rotor construction point of view. The two main types of synchronous machine are Cylindrical Rotor and Salient Pole. Saliency simply means projection outward. Therefore from the literal meaning of Saliency one can guess that Salient Pole machines must have poles projecting outward. In general, the Cylindrical Rotor type machines are confined to 2 and 4 pole turbine generators, while salient pole types are built with 4 poles upwards and include most classes of duty. Both classes of machine are similar in Stator construction point of view. Each has a stator carrying a three-phase winding distributed over its inner periphery.

Within the stator bore is the rotor which is magnetised by a winding carrying DC current. The main difference between the Cylindrical Rotor and Salient Pole classes of machine lies in the rotor construction. The cylindrical rotor type has a uniformly cylindrical rotor that carries its excitation winding distributed over a number of slots around its periphery. This construction is unsuited to multi-polar machines but it is very sound mechanically. Hence it is particularly well adapted for the highest speed electrical machines and is universally employed for 2 pole units, and some 4 pole units.

The salient pole type has poles that are physically separate, each carrying a concentrated excitation winding. This type of construction is in many ways complementary to that of the cylindrical rotor and is employed in machines having 4 poles or more. Except in special cases its use is exclusive in machines having more than 6 poles. Two and four pole generators are most often used in applications where steam or gas turbines are used as the prime mover. This is because the steam turbine tends to be suited to high rotational speeds. Four pole steam turbine generators are most often found in nuclear power stations as the relative wetness of the steam makes the high rotational speed of a two-pole design unsuitable. 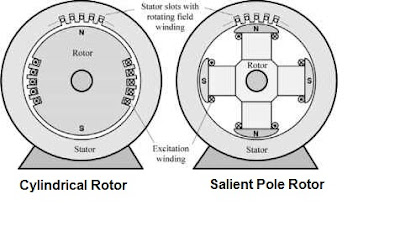 Most generators with gas turbine prime mover are four pole machines to obtain enhanced mechanical strength in the rotor since a gearbox is often used to couple the power turbine to the generator; the choice of synchronous speed of the generator is not subject to the same constraints as with steam turbines. Generators with diesel engine drivers are invariably of four or more pole design, to match the running speed of the driver without using a gearbox. Four-stroke diesel engines usually have a higher running speed than two stroke engines, so generators having four or six poles are most common. Two stroke diesel engines are often derivatives of marine designs with relatively large outputs and may have running speeds of the order of 125 rpm. This requires a generator with a large number of poles (48 for a 125 rpm, 50Hz generator) and consequently is of large diameter and short axial length. This is a contrast to turbine-driven machines that are of small diameter and long axial length.

To summarize, the main differences between the Cylindrical Rotor and Salient Pole machines are as follows:

In salient pole type of rotor consist of large number of projected poles i.e. salient poles mounted on a magnetic wheel. Construction of a salient pole rotor is as shown in the figure at left. The projected poles are made up from laminations of steel. The rotor winding is provided on these poles and it is supported by pole shoes.

Non-salient pole or Cylindrical rotors are cylindrical in shape having parallel slots on it to place rotor windings. It is made up of solid steel. Sometimes, they are also called as drum rotor.