How Directional Feature Incorporated in a Relay?

For understanding the need of Directional Relay we consider a power system as shown in figure below.

For fault at F1, Relay R2 is supposed to pick-up and operate the circuit breaker. Similarly for fault at F2, Relay R1 shall operate to isolate the faulty section from the healthy section. Now suppose fault occurs at F2, it may happen so that Relay R2 operate before the operation of Relay R1 as the set pick-up value for both the Relay is same and both Relay see the same fault current. As Relay R2 is operating here hence the power supply to the load from Source B is interrupted even when there is no fault in that section. To avoid such scenario what can be done?

But how can we provide this directional feature to a Relay? Which electrical quantities need to be used for this?

For answering this, suppose a system as shown below.

Suppose a fault occurs at F1. The fault current is flowing in the direction of I1. The bus voltage is measured using a PT which is Vp here. The CT secondary and PT secondary is connected to the Relay R2 Operating and Polarizing Coil respectively. Will explain Polarizing Coil latter in this section, be patient till then.

To summarize, if the fault is at F1 then current is lagging Vp and if fault is at F2, current is leading Vp. We can use this concept to provide directional feature in the Relay. We can set in the Relay that if I1 laggs Vp then only it should operate for both Relays R2 and R3, thereby eliminating the problem of actuation of R3 for fault at F1.

Thus, if we measure the bus voltage phasor Vp and compute the phase angle of relay current with respect to bus voltage, then we can use the following logic to provide selectivity. If the relay ‘detects fault’ and current lags VR (= Vp), then permit relay tripping. If the relay ‘detects fault’ and current leads VR (= Vp), then inhibit the relay tripping. The ‘discrimination principle’ based on phase angle comparison between a set of phasors, one of which is used as reference is called ‘Directional Discrimination Principle’. Relays with this principle are called directional relays. 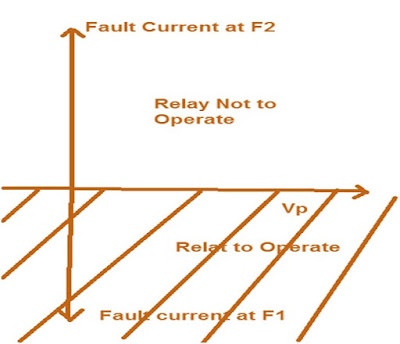 How Directional Relays are designed?

The torque developed by a directional unit is given as

Ɵ = Angle between V and I

The phasor diagram for directional over-current relay is shown below. 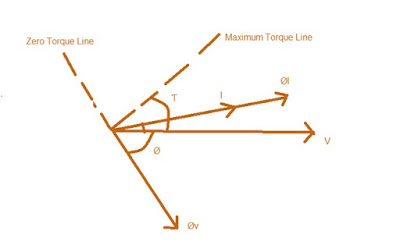 Here, Øv is the flux created by Voltage Coil which lags behind the Voltage by around 70 to 80 degree. ØI is the flux created by current coil. The net torque is produced by the interaction of Øv and ØI. The torque will be zero if the angle between Øv and ØI is 180 degree which is as shown in the phasor above. This is called Zero Torque Line. Also, if the angle between Øv and ØI is 90 degree then the Torque will be maximum which is shown by dotted line in the above phasor which is called Maximum Torque Line and the angle Ƭ is called Maximum Torque Angle or Relay Characteristics Angle (RCA). Here it is to be noted that V is assumed fixed and hence reference phasor. This reference phasor is called Polarizing quantity.

Now, as V is unchanged hence for the production of net torque for directional Relay,

Assume k to be negligible, actually K is restrain torque because of spring and friction.

This equation can be represented in polar form as shown below. 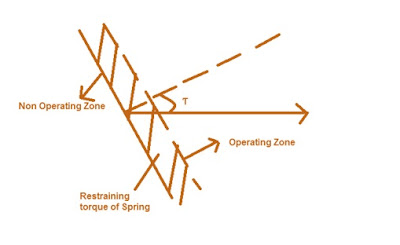 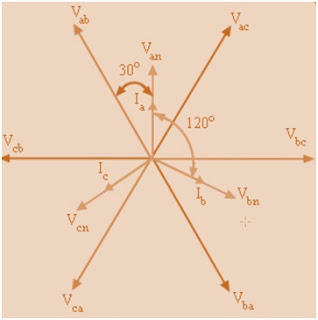 Vector diagram and relationship between different phasors are shown above.

Here, Vbc is perpendicular to the Van. Therefore it is better to take Vbc as reference phasor. We take the Maximum Torque Line at an angle of 30° with Vbc. As Zero Torque Line is perpendicular to the Maximum Torque Line, hence it is drawn as shown in figure below. We need to check whether the Relay will operate for Line to Line and Phase Phase to Line fault for this assumed reference Phasor. It does operate, which is described below. 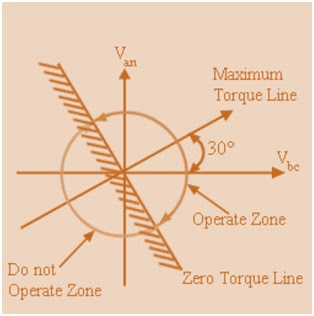 Now consider a line fault involving phase ‘a’ and ‘b’. Then, using 3-phase line model we get,

If for simplicity we assume Z to be purely reactive, then from below figure we get that    If ab will be at an angle of 60 degrees lagging to Van. Thus, unit with Vbc as reference phasor will pick-up on both 3-phase fault and L-L fault. 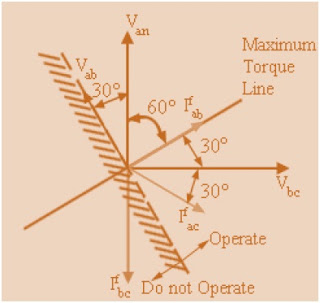 To summarize, the key feature in obtaining directional discrimination is the placement of zero torque line which separates the R-X plane into two regions viz. operate and do not operate. It is apparent that in numerical relays, this placement is quite flexible and can be specified with respect to any one reference voltage phasor. This placement can be made programmable.

15 thoughts on “How Directional Feature Incorporated in a Relay?”