How does Motional EMF Produced?

Motional EMF is the potential difference produced across the length of a conductor moving in a Magnetic Field. Suppose a conductor of length l is moving with a velocity v in a uniform magnetic field B as shown in figure below. 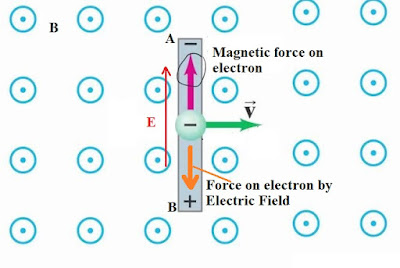 As the conductor is having mobile electrons which can move freely, therefore we can say that electrons of conductor is also moving with a speed of v in an external magnetic field B.

The force experience by electrons because of developed Electric Filed E,
F’ = eE in downward direction.

Thus Force because of Magnetic Field and Electric Field are opposing each other and electron will continue to move toward A till the Electric Force and magnetic Force balances each other. At equilibrium condition,

Potential Difference between A and B i.e. EMF = E.l

As this potential difference is because of movement of conductor in a magnetic field, this is popularly known as Motional EMF.

So, for a conductor of length l, moving with a velocity v in a uniform magnetic field B, the motional EMF = vBl