As we know that for a DC Motor having armature resistance Ra, rotating at some speed ωm,

From equation (1), it is clear that speed of a DC Motor can be controlled by the following methods:

We will discuss the first method of speed control i.e. by changing the Armature circuit resistance for DC Shunt Motor in this post.

So output power of DC Motor will reduce. Therefore, by Armature Circuit Resistance Control method only speed below base speed can be obtained. 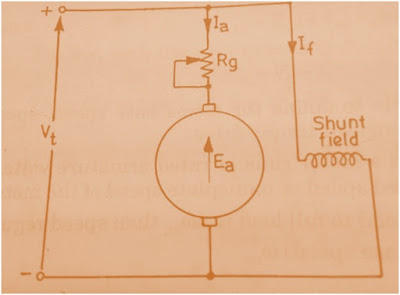 Thus it is clear that speed of DC Shunt Motor reduces. As Rg is variable Resistor hence by changing this Resistance Rg we can have full control of speed of DC Shunt Motor. It is also clear that as we increase the value of External Series Resistor Rg, ohmic loss in this Rg will increase and hence the output of DC Motor will reduce which in turn will result in decreased speed.

It shall also be noted that as we increase the value of Rg, the efficiency of DC Shunt Motor will reduce as the output power of DC Motor is reducing.

So from equation (2) it is clear that we increase the value of External Series Resistance Rg, operating speed of DC Shunt Motor will decrease proportionally as shown in figure below. 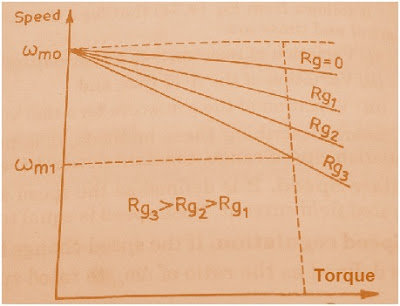 I will discuss this method for DC Series Motor by conventional way as you will find in most of the books but you can proceed in the same way as discussed for DC Shunt Motor.

The connection diagram for speed control of DC Series Motor by Armature Circuit Resistance Control Method is shown below. 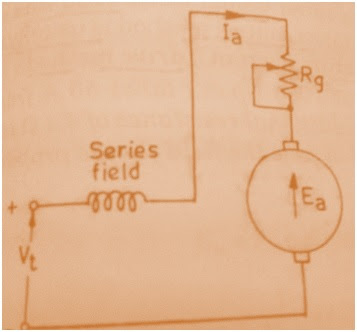 As we know that,

So from equation (3) it is clear that we increase the value of External Series Resistance Rg, operating speed of DC Series Motor will decrease as shown in figure below. 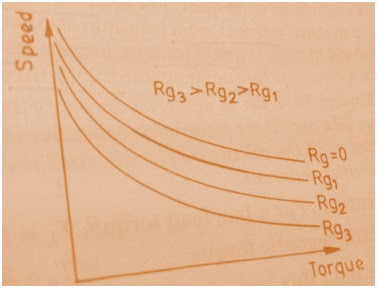 Hope you enjoyed this post. Your suggestion and feedback is very important to me. Thank you!

One thought on “Speed Control of DC Motor”