Step potential is the voltage between the feet i.e. one step of a person standing near an energized grounded object.

Now, the most important thing is to understand the physical meaning and significance of Step Potential and Touch Potential.

For theoretical considerations, True Earth is a conductor deep in the ground with virtually no resistance. With this definition of True Earth, ground resistance can be thought of as the resistance between, a ground mat or substation grid and true earth. By this definition, the surface then is not true earth. Current can and will flow along the surface, but has a tendency to go deep. In the figure below, Ground Network is the ground Mat. 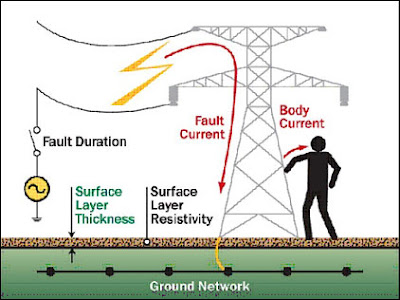 Now consider a line to ground fault on a Transmission Tower in the Switchyard area. The fault  current on a transmission tower will travel down the grounding conductor and legs and then spread out over the surface before going deeper, thereby posing a potential hazard to utility workers in the vicinity. The closer to the tower legs, the greater the concentration of current and the higher the voltage. The wider apart the person’s feet or the greater the distance from the hands (if touching the structure) to the feet (if standing at ground potential), the greater the voltage gradient across the body. It is for this reason that Stepand Touch potentials are evaluated and measures taken to have them brought within safe limits.

Current flow causes a voltage drop at the earth’s surface. A person standing with feet apart will develop a portion of this potential difference from foot to foot. Resistance increases as current flows away from the point of entry into the soil at a ground rod or tower leg. Therefore, the risk to personnel is greatest near the point of entry, with the voltage drop over the same span becoming less and less with distance. Hence, the voltage gradient across the span of a typical human step is Step Potential. 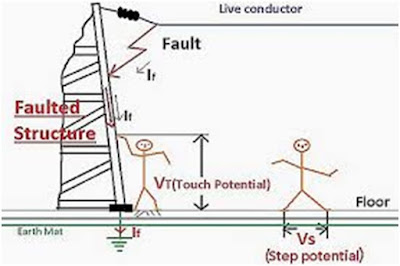 Engineering standards use a one-meter reach distance for calculating Touch Potentials. A two-meter reach distance is used when two or more objects are inside the event area. For example, a person could be outstretching both arms and touching two objects at once such as a tower leg and a metal cabinet.

Mitigating Step and Touch Potential hazards is usually accomplished through one or more of the following three main techniques:

Thus if ever any incident occurs at the Switchyard area, never run away rather take smaller step to exit from the Switchyard. As longer step will cause high voltage across the feet which might be dangerous.