As we know that Power Output of an Alternator,

Thus it is clear that power output of an Alternator will be maximum if load angle δ is 90°.

But in spite of the fact, load angle δ is kept between 20° to 30°. This is done to provide a margin and stability to the power system, it is connected with.

In case, power demand increases, Alternator will be able to cater the load as it can increase its load angle up to 90°. If we see the Power-Angle Curve of an Alternator, it is seen that, an Alternator can cater power up to load angle 90°. 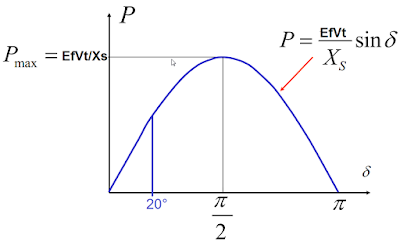 The load angle of 90 degree is known as the point of critical stability, if the load angle exceeds this value then the alternator will become unstable and its speed can go out of control.

To ensure that this situation never occur the alternator is always operated at a load angle of 20° to 30°.