Direct-on-Line or DOL Starting is the simplest mode of starting of Induction Motor where the stator is directly connected to the mains supply as shown in figure below. 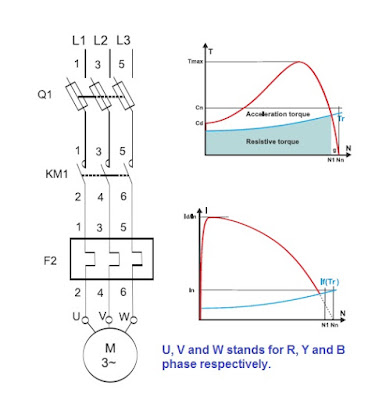 The motor starts with its own characteristics. When it is switched on, the motor behaves like a transformer with its secondary, formed by the very low resistance rotor cage, in short circuit. There is a high induced current in the rotor which results in a current peak in the mains supply:

Current on starting = 5 to 8 times of rated current.

Now have better understanding of DOL starting of Squirrel Cage Induction Motor, we will calculate the ratio of Starting Torque Test and Full Load Torque Tfl.

As we know that torque in Induction Motor is given as,

Where I2 is rotor current, r2 is rotor resistance, ws is synchronous speed and s is slip.

Here I2st and I2flare per phase rotor current during starting and at full load respectively.

From the basic concept of Induction Motor, we know that Induction motor behaves as a Transformer and therefore the concept of transformer action can be applied here. Neglecting no load current we can write as,

Hence for starting and full load current we can write as,

But during starting an induction motor behaves as a Transformer having secondary shorted, hence starting current will be short circuit current Isc. Therefore,

In spite of advantages of DOL or Direct-on-Line Starting (being simple equipment, high starting torque, fast start, low cost), direct on-line starting is only suitable when for the following cases:

1)    The power of the motor is low compared to that of the mains, which limits interference from inrush current.

2)    The machine to drive does not need to speed up gradually or has a damping device to limit the shock of starting.

3)    The starting torque can be high without affecting machine operation or the load that is driven.