To get a general expression or formula of distribution factor, let us assume a 2 pole, 3 phase electrical machine having a total of 18 slots in its stator. These slots are distributed along the periphery of stator in 2 pole pitches. Therefore the angle between any two consecutive slots will be equal to 20 degree (2×180 / 18 = 20). This angle between two consecutive slots is called Angular Slot Pitch.  It is in electrical degree not in mechanical degree.

Thus angular slot pitch for our example is 20 degree. The number of slots per pole per phase will be 3 [(18/2)/3 = 3]. This means that a particular phase will consists of three coils distributed in three slots under a single pole. This is shown in figure below. 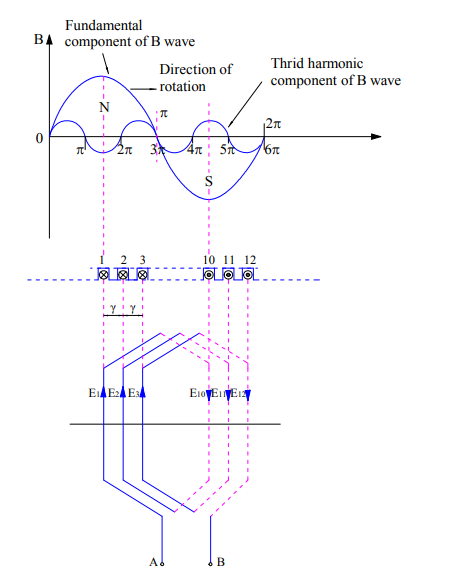 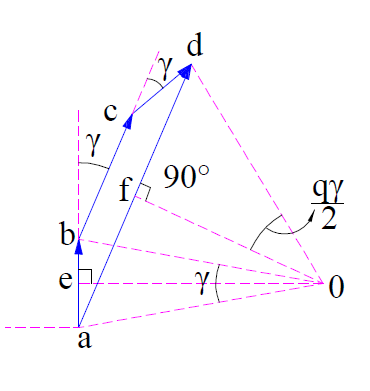 In the above phasor, ab represents (E1+E10). Since the slots are displaced from each other by angular slot pitch of γ (in our example, it is 20 degree), this means the emf induced in coil 2-11 will be displace by an angle of γ from reference phasor ab. This is shown by ‘bc’ in above phasor. Similarly, ‘cd’ represents the emf induced in coil 3-12 and is displaced by reference phasor by and angle of 2γ.

Thus the total emf across terminals AB of coil will be the phasor sum of ab, bd and cd which is equal to ‘ad’. Let us now calculate this phasor sum.

Since ab, bc and cd are lying in stator slot, therefore their perpendicular bisector must meet at the centre of the circle. Let us now draw perpendicular bisector oe and of on ab and ad respectively as shown in above figure. In general, the angle aob should be equal to angular slot pitch γ, angle aod equal to qγ and angle aof equal to (qγ/2) where q is number of slots per pole per phase.

Thus, ab = 2oeSin(γ/2) as oe is perpendicular bisector of ab.

Therefore, if the coil were concentrated then the emf across coil terminal AB would have been arithmetic sum of emf. This is given as

Hence the resultant emf ad equal to the phasor sum of ab, bc and cd is given as

Therefore as per the definition of distribution factor,

Thus the formula for distribution factor is given as below.

where q is number of slots per pole per phase and γ is angular slot pitch.

Effect of Harmonics on Distribution Factor

In electrical machine, every effort is made to make the magnetic flux density wave sinusoidal in space. But practically, it is never distributed sinusoidally in space. Rather it contains various harmonics. Out of various harmonics, third harmonic is the most dominant. A third harmonic component of flux density wave may be assumed to be produced by 3 poles as compared to the one pole for fundamental component. In view of this, the angular slot pitch for third harmonic will be 3γ and hence nγ for nth harmonics.

Thus the distribution factor for nth harmonics is given as below.

One thought on “Distribution Factor – Definition, Calculation and Formula”