Firing Angle of SCR is defined as the angle between the instant SCR would conduct if it were a diode and the instant it is triggered.

We know that, there are two conditions which must be satisfied for turn on of an SCR. They are:

Let us understand the concept of firing angle in detail. For the sake of better understanding, consider the figure below. 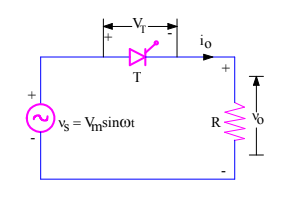 In the above figure, a thyristor T is connected to AC source vs and load resistance R. Just think, if the thyristor is replaced with a diode, it will start conducting for positive half cycle of the supply voltage as it is forward biased for this period. But will it be the same case thyristor?

Obviously, No. It’s true that SCR is forward biased for positive half cycle of the supply voltage but unfortunately gate signal is not applied. Hence, it will not conduct or turn on. Let us now apply gate signal at some angle α on the source voltage curve as shown in figure below. 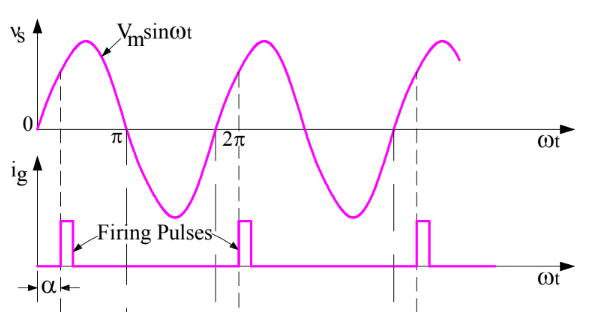 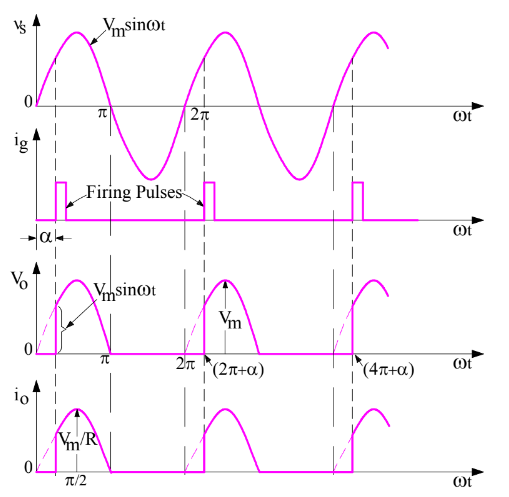 It’s not so. At ωt = π, the current through the SCR will become zero as the load is resistive in nature. Further, from ωt = π to 2π of supply voltage, the SCR is reversed biased. Therefore, the SCR will turn off naturally provided this half time period should be greater than SCR turn off time. This technique of SCR turn off is called Natural or Line commutation.

Since, the source voltage is sinusoidal with a time period of 2π, so firing angle will be “α”.

Firing Angle may also be defined as the angle measured from the instant SCR gets forward biased to the instant it is triggered. From this definition, the firing angle for our example is α.

One thought on “Firing Angle of SCR Explained”