The formation of pn junction in a single crystal due to doping with p type and n type material is shown in figure below. 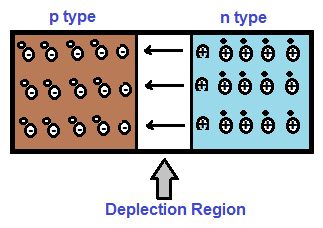 Unbiasing means, no voltage source is connected across the terminals of pn junction diode. Let us investigate the phenomena happening inside the junction.

Since p side and n side is having holes and electrons as the majority carrier, the concentration of hole is more in p side whereas concentration of electron is more in n side. Due to this difference in concentration, holes will start to diffuse toward the n side and electrons will start to diffuse toward p side. In this process, holes and electrons will recombine and hence will neutralize. As a result, the acceptor ions near the p side and donor ions near the n side are left un-neutralized. This un-neutralized ion near the vicinity of pn junction is called uncovered charges. The positive and negative uncovered charge produces an electric field across the pn junction. The direction of this electric field is from n side to p side. This electric field set up by the uncovered charges in the pn junction diode is called the Barrier Field. This barrier field opposes the diffusion of holes and electrons and equilibrium is reached when the strength of this barrier field is enough to stop further diffusion of holes and electrons across the pn junction. After this, there will not be any further diffusion of majority carriers. Thus the neighborhood of junction is devoid of any free charges and therefore this region of pn junction is called the Depletion Region. The terms depletion itself means that there is a depletion of free charges in the region i.e. pn junction.

To summarize, there is no flow of current in an unbiased pj junction diode. It is just a device under this condition. 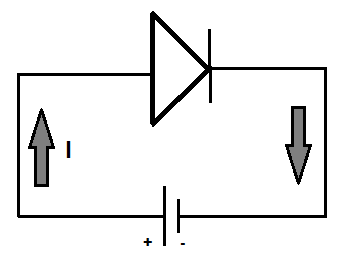 Since p and n sides are connected to positive & negative plate of battery respectively, the positive plate will force the holes in p side toward n side and attract the electrons in n side toward p side. Similarly, the negative plate will push the electrons in n side and will attract the holes in p side. Thus both the positive and negative plates are exerting a force for the flow of holes and electrons. If the battery voltage is more than the barrier potential, the holes and electrons will have enough energy to cross the pn junction. Subsequently flow of current will start through the pn junction diode. It should also be noted that the width of depletion region will decrease under forward biased condition. Thus in forward biased diode, current flows from anode to cathode or from p side to n side as shown in above figure.

To summarize, a forward biased diode acts like a closed switch provided the forward biasing voltage must be greater than the barrier potential. If the forward biasing voltage is less than the barrier potential, the energy imparted by battery to the electrons and holes will not be enough energy to cross the pn junction. Hence it will block the flow of current. Thus we observe that a diode not a bilateral device. Note that bilateral device is once which allows the flow of current in both the direction. 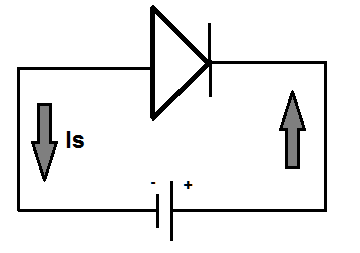 A reverse biased pn junction diode acts like an open switch and blocks the flow of current from anode to cathode.