Armature Winding and Its Types

Armature winding in an electrical machine is that winding which carries the load current. In other words, it can also be defined as the winding in which emf is generated due to air gap field flux. It should be noted here that, air gap flux or working flux is produced due to flow of DC current in the field winding.

Armature winding is made of copper and consists of large number of insulated coils. These insulated coils may have one or more turns. These coils may either be connected in series and parallel depending upon the type of winding required.

There are mainly two types of armature winding: Closed Winding and Open Winding

Closed winding means the winding which is close in itself in the sense that if one starts and traverse the winding then he will return to starting point again. Such type of winding is mainly used for DC machine and AC commutator machine.

In lap winding the two coil sides of a particular coil are connected to adjacent commutator segment as shown in figure below. 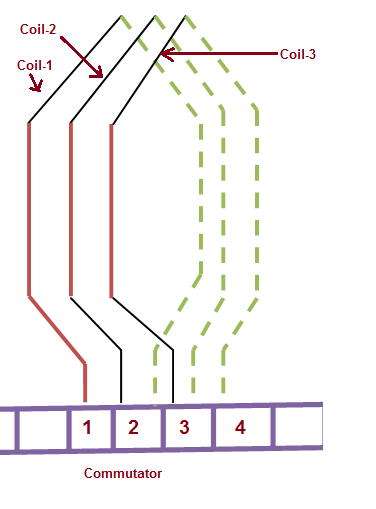 There are three different types of Lap Winding:

In wave winding, the two coil ends are bent in opposite direction and connected to commutator segments which are approximately two pole pitches apart. Figure below shows a wave winding.

Notice that the both coil ends of coil-1 and coil-2 are bent in opposite direction and connected to commutator segments separated by approximately one pole pitch or 360 electrical degree apart.

There are three types of Wave Winding:

Open winding is one in which the winding terminals are open. Such type of armature winding is used only for AC machine like Induction machine, Synchronous Machine etc. It should be noted here that 3 phase DELTA connected winding in AC machine is a closed circuit, though it can be made open and reconnected in STAR if required. Thus open winding can be open-circuited but closed winding can never be open circuited in any case.