Class-D Commutation is a commutation method used to turn off thyristor in a DC circuit by the application of a sudden reverse voltage across the terminals of SCR. This is the reason, it is also called Impulse Commutation.

A Class-D commutation circuit consists of Main Thyristor T1, Auxiliary Thyristor TA, Capacitor C, Diode D and Inductor L. Load current I0 is assumed to be constant throughout the discussion. Let us consider the commutation circuit shown below for better understanding. Reference direction of capacitor current and capacitor voltage is shown in figure. 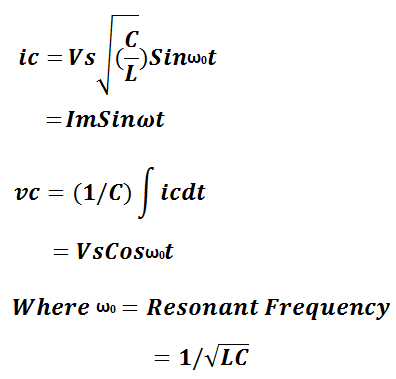 Due to this resonating current, the current through main thyristor T1 at any instant of time is equal to the sum of load current I0 and ic i.e. (I0+ic). The waveform of resonating current and voltage across the capacitor is shown below: 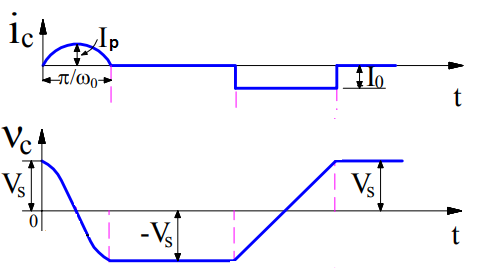 Now, we want to turn off main thyrsistor T1. We will we do? The auxiliary thyristor TA is fired at t=t1. As soon as auxiliary thyristor TA gets ON, a sudden reverse voltage equal to the capacitor voltage is impressed across the main SCR T1. Due to this, the current through main SCR reverses momentarily to recover the stored charges. Due to this recovery of stored charges, the current through the main SCR T1 gets quenched and it gets turned OFF. 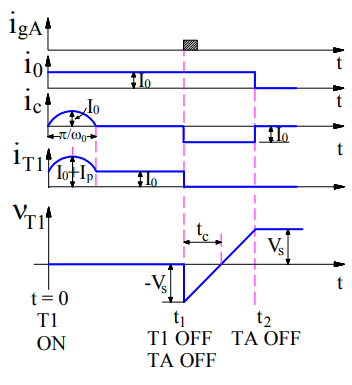 Let’s see what happens after turning OFF of main SCR T1. Once main thyristor T1 gets OFF, constant load current starts flowing through Capacitor C and Auxiliary Thyristor TA (as it is still ON). Due to this load current, the capacitor gets charged from –Vs to +Vs. As the load current is constant, this charging of capacitor from –Vs to +Vs is linear. When capacitor charges to +Vs, it will not allow any further flow of load current. Thus current through Auxiliary Thyristor TA becomes zero and it gets turned OFF. During the time TA is ON i.e. from t=t1 to t=t2,

Negative sign is used for voltage and current as it is opposite to the reference direction shown in circuit diagram. Circuit turn off time is tc.